There are several methods to clean insulators.

In general, insulator washer truck aerial platforms are not insulated unless they are also used for live line maintenance. The reason why we do not insulate the platforms is because the wash guns and truck chassis should be grounded to the structure.  Adding an insulated insert is therefore unnecessary as it must be bypassed during the washing process.

Both the skid and trailer have their own advantages in having a mobile washing system installed on them. The basic skid package consists of all of the washer components. The water tanks size will simply depend on the load capacity of the chassis used to transport the washer. The advantage of using a skid is that it can be set on or taken off any chassis very easily with a crane, which allows the chassis to have other applications, primarily in substation applications. The washing trailer is the most utilized washer for substation work because it has a fairly good sized water tank – 6000 liters. The second most common reason why it is used is because it does not tie up the chassis for only use as a water tank. With the use of a truck or a tractor, a trailer becomes quite effective at being mobile and able to clean a substation. The trailer is also used for washing transmission lines with a chassis pulling the trailer. Often in this case the pulling chassis can be a mobile aerial lift, particularly for washing distribution network insulator, or in some cases a chassis equipped with an extra water tank.

A third test was conducted on contaminated insulators. Firstly, they were flashed over, then washed, then flashed over again. During the process the voltage was noted when the second flashover occurred, thus establishing the effectiveness of the “washing”. An important note to add is that most of the insulators obtained full insulation ability.

The importance of having clean insulators stems in the issue of avoiding power loss due to leakage along the insulator chain. The testers had established that 1 milliampere would be the maximum acceptable limit of leakage current. Through a series of trials the optimal water pressure and distance had been found. Further, the testers also determine that special equipment had to be used in the washing. Initially fire and gardening hoses had been used, but due to the inability at being able to achieve the optimal pressure, hoses with smaller orifices, allowing greater pressure, were developed.

Below is a chart that shows the recommended Minimum safe washing distances and pressures.

Live line consulting project in Pakistan. Below are photos of a 132 KV suspension tower insulator replacement.

In the field of live line maintenance there is a large variety of equipment used to wash insulators. Currently there are a few substation and special tower applications which possess fixed washing systems installed. However, for effective cleaning to occur there is a requirement for the insulator to be “hit” from varying angles at different lengths of time. The only achievable method of doing this with a fixed washing system requires a highly complex and sophisticated system, which ultimately is quite costly. The most effective solution to the highly complex and expensive fixed washing system is through the utilization of a mobile type washer which functions by either an operator-held or a single remote control nozzle.

In November 2013, MITSA completed a second 6 week training course with Harouge Oil Company. This was a basic introductory course to live line maintenance. Below are some training photos from class 2. 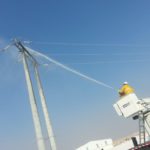 In October 2013, MITSA completed a 6 week training class for Harouge Oil. Below are some photos for class 1. 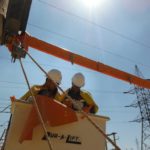 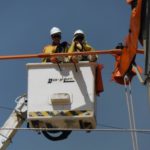 The tests that had been run took place in a district were some insulators were being washed, whereas others were not. After light rain and fog, 57 pole tops had caught on fire along with 12 circuit interruptions in the unwashed section. On the contrary, no issues whatsoever  occurred on the washed insulators. The effect of adding other materials in water for washing was a test subject. An abrasive material (Grand Monterrey Sand) had been added to to a water stream. Effectively speaking, this abrasive material had been found to make no difference in washing contaminated insulators. Instead, the abrasive material posed a threat for clogging up the nozzle, thus disrupting the flow of water. Unfortunately, when put against cement and petroleum based materials, water had only been effective to a certain degree.

This website uses cookies to improve your experience while you navigate through the website. Out of these, the cookies that are categorized as necessary are stored on your browser as they are essential for the working of basic functionalities of the website. We also use third-party cookies that help us analyze and understand how you use this website. These cookies will be stored in your browser only with your consent. You also have the option to opt-out of these cookies. But opting out of some of these cookies may affect your browsing experience.
Necessary Always Enabled
Necessary cookies are absolutely essential for the website to function properly. This category only includes cookies that ensures basic functionalities and security features of the website. These cookies do not store any personal information.
Non-necessary
Any cookies that may not be particularly necessary for the website to function and is used specifically to collect user personal data via analytics, ads, other embedded contents are termed as non-necessary cookies. It is mandatory to procure user consent prior to running these cookies on your website.
SAVE & ACCEPT